≡ Menu
All About Vaginal Discharge > Watery Discharge During Pregnancy

“Is watery discharge a sign of pregnancy?”
That’s perhaps the most common question patients ask me, especially if they are very concerned or excited about a potential pregnancy. It’s quite easy to distinguish normal watery discharge from pregnancy-related discharge, and the primary factor that differentiates the two is the time of occurrence.

While normal watery discharge occurs mid-cycle, when you’re ovulating, pregnancy-related discharge occurs just before your period is due to start, and may as well continue a few days after it was supposed to start. Most of the time, the absence of menstruation speaks for itself – but what if there’s something more serious going on? So, is watery discharge a sign of pregnancy or not? The material below answers your most common questions about discharge in early pregnancy.

If you think you may be pregnant, one of the best ways to figure this out is paying close attention to and taking note of all symptoms that may indicate a potential pregnancy.
Discharge during early pregnancy doesn’t look very different from your normal mid-cycle discharge. Most of the time, it’s clear or whitish, has a watery and slippery consistency, and bears a mild musky odor. Just like when you’re ovulating, the amount of early pregnancy watery discharge increases exponentially to the point of wetting your underpants and soaking through your pants. 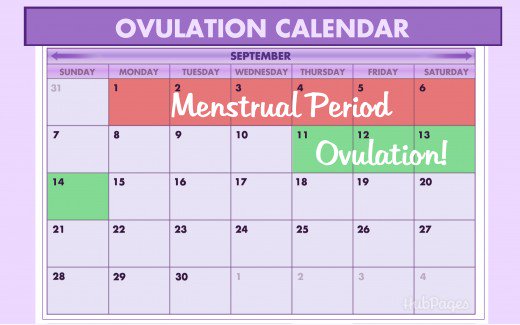 The first thing to do is calculating your ovulation period. Write down when your next period is due to start and count 12 to 14 days back. If the time when you have first experienced watery discharge corresponds to your ovulation period, chances are you’re not pregnant. But if it doesn’t and there are just a couple of days left until your period is supposed to start, you need to proceed to the next step – looking for other pregnancy symptoms. 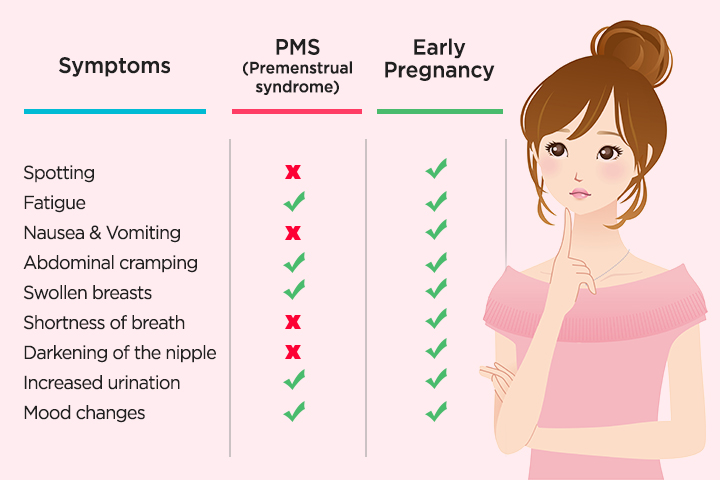 If you are pregnant, the watery discharge won’t come alone – it will be accompanied by other symptoms as well. These include breast tenderness, frequent urination, nausea with or without vomiting, fatigue and food aversions or cravings. You may even have a vague feeling that you are pregnant, an occurrence that many women report while pregnant. Another pregnancy sign is implantation bleeding or spotting, which usually occurs 6 to 12 days after conception. Some women don’t experience it, while some who do may confuse it with their menstruation instead. However, implantation bleeding is very light and will last for a few minutes to a few days, as compared to the average time of your period (4-7 days).Read more about implantation bleeding and other reasons of brown discharge here.

Having clear watery discharge, but not pregnant? This article is just for you!

Not sure if you are pregnant? Read about the best ways to answer the key question!

It’s great if you take care of yourself and pay attention to your discharge, presence of any abnormal symptoms. This approach may help you indicate your pregnancy at the early stages. However, you may not experience any changes in your body and still be pregnant! Sounds not great. How can you be sure? What kind of tests are reliable and when can you use them? Read below and be sure! 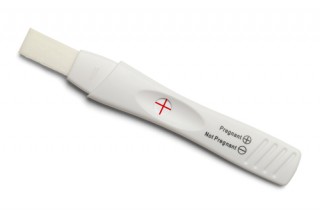 Remember, there is no other way of finding out if you are pregnant of not, but for a pregnancy test! There are several types of them, but they all indicate a presense of specific hormone  — hCG (human choriogonadotrophin). This substance appears in woman body only during pregnancy. When? Only in 5—7 days! Why? Read on! 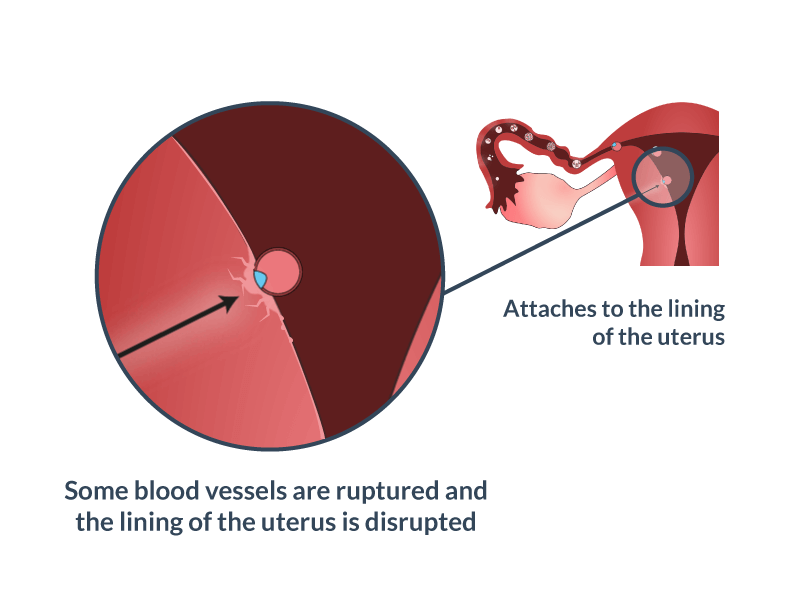 After a “successful” conception an embrio is located simply inside your womb. It takes approximately 5-7 days for it to intergrow into one of the uterus walls. Those 7 days before the actual implantation embrio exists by itself and that’s why there are no specific signs of pregnancy in woman’s organism. Some woman notice the implantation itself — they feel cramps and get implantation bleeding, others don’t get those tips. After the “connection” happens embrio becomes a complete whole with woman organism. That’s the moment when that hCG appears in woman body.

Hometest is negative, but still no period and pregnancy symptoms?

Be careful! It’s time to visit your gyn as soon as possible. There are different conditions when you may have no period without pregnancy. However, some of them can be life—threatening, espcially ectopic pregnancy. 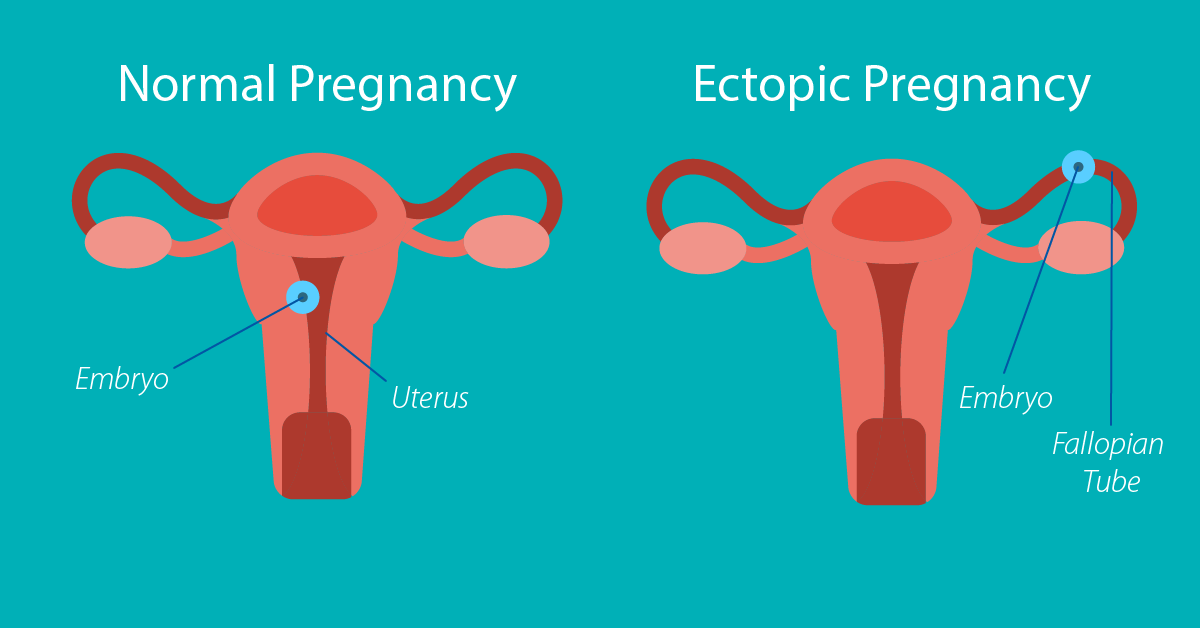 Ectopic pregnancy is when embrio gets implanted not into one of the uterus walls, but somewhere else (more often into one of the fallopian tubes). According to the study of Kirk E, Bottomley C, Bourne T  approximately 1,5% of pregnancies are ectopic.

If the pregnancy is ectopic, the following sign and symptoms develop as the growing embryo presses against the inflexible walls of the fallopian tube:

I Have Watery Discharge During Late Pregnancy, Is This Normal?

As your pregnancy progresses, your body goes through a thousand more hormonal changes than during early pregnancy. During the third trimester, the amount can increase by 30 times than during the first trimester, leading to a very unpleasant feeling down there. During the last week of pregnancy, your cervical mucus plug may come out either all at a time, in the form of a blood-streaked ball of mucus, or gradually as increased vaginal discharge. If this happens when you urinate, you may as well not even notice it, although you may observe pinkish, bloody stains on your underpants or toilet paper.

If your discharge changes color, gets strong odor or you experience any other bothering symptoms, that worry you  — feel ok to call and visit your doctor!