≡ Menu
All About Vaginal Discharge > Light Vaginal Bleeding: Find Out the Answers

It’s hard to be a woman as it is. Monthly menses give you a wet, uncomfortable feeling for days. A pad could leak. Tampons could get lost inside you. You could stain your favorite pair of pants. You worry if you’re giving off a bloody odor. It could suddenly happen on a much-awaited date night. 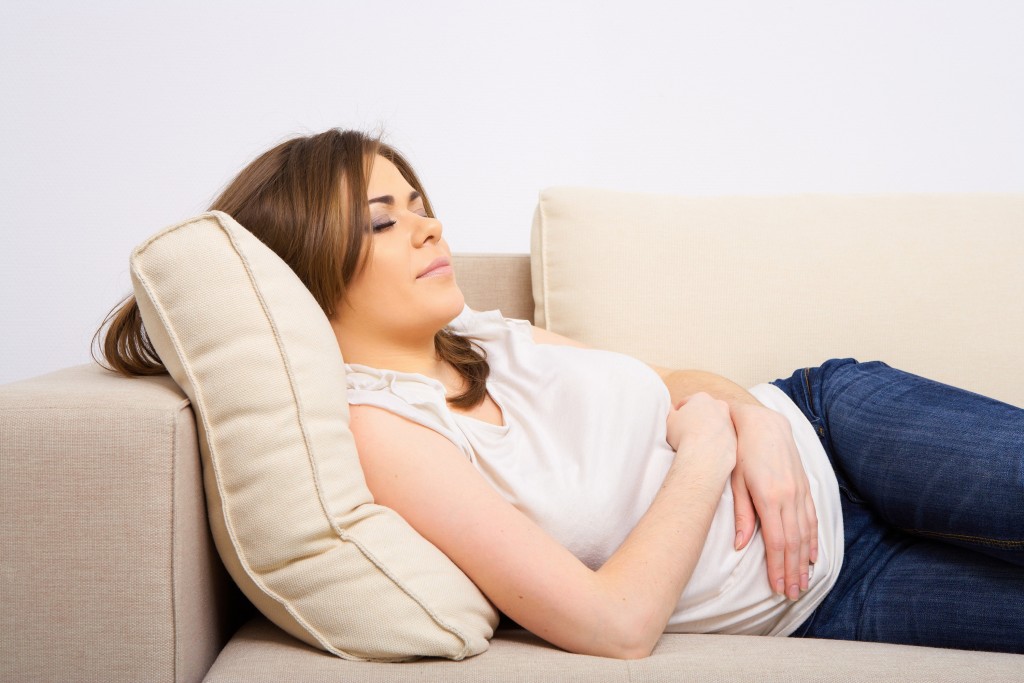 But that could be the least of your problems. The flow can suddenly become heavy and prolonged, or it could become short and very light. You could have it on days when you know you don’t have a period. Now you don’t just have to worry about dealing with menses, you have to worry about what could be wrong with you.
It is best to be informed before you see the doctor. Read the following to find out what can cause light bleeding.

You might feel some accompanying pain or cramping a week before periods. It could be felt as pain or pressure in the lower stomach area. It could also affect your hips, lower back, and inner thighs. Sometimes the pain is so severe that it would cause you to vomit or have diarrhea. Contractions in the uterus cause menstrual cramps The uterus contracts so it can get rid of the lining which is no longer needed because the egg is not fertilized. When it contracts it pushes the surrounding blood vessels and cut off the supply of oxygen to its tissues, and the dead tissues go with the menstrual flow. You feel pain when the tissues are being starved of oxygen. 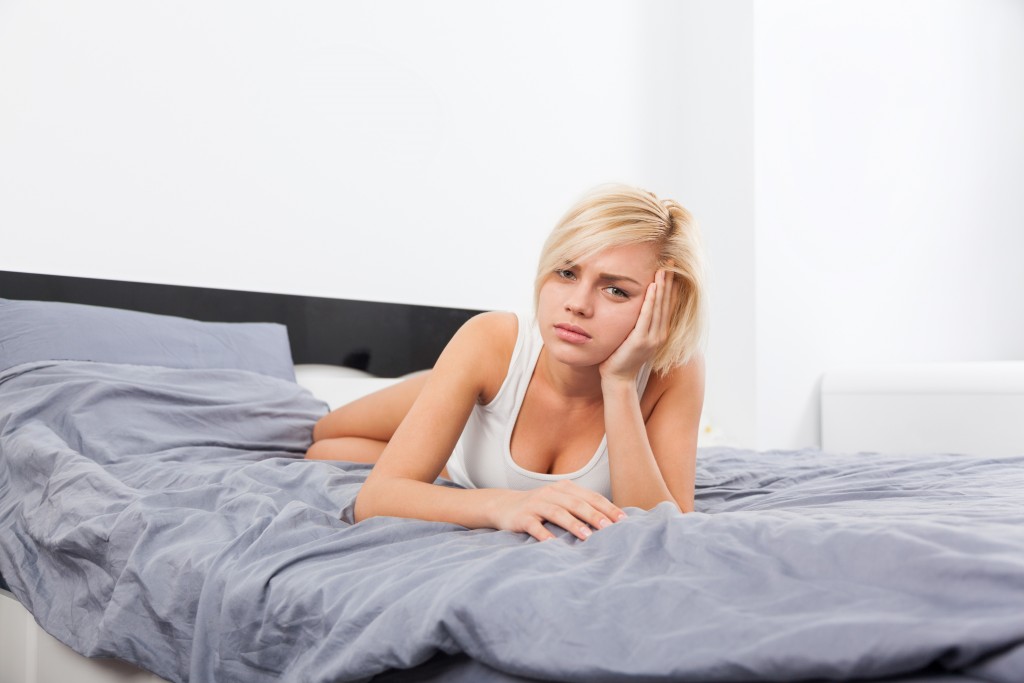 You can also experience light bleeding if you are on birth control. Hormonal contraceptives work in such a way as to introduce artificial hormones to your system, specifically synthetic estrogen and progesterone. Instead of experiencing fluctuations in your hormonal levels, birth control medication will keep it level all throughout (except at the end of the cycle when placebo pills are ingested). Thus, the uterus does not receive the estrogen signal to begin ovulation. When it is time to ingest the placebo pills so that you can begin menstruation (you can actually continue ingesting birth control pills to stop menstruation altogether, but some prefer the security of knowing they are truly not pregnant that they can get from experiencing menstruation), the estrogen levels may still be too high, causing a lighter than normal period instead of full blown menstruation.

Ironically, even though birth control pills may cause a little haywire to your cycle, they are given to those who experience irregularities in order to regulate their cycle.

Young girls who have not experienced true menstruation will experience some spotting or staining in their underwear in the form of a brown discharge instead of a period. This is how the body gets rid of old uterine cells in preparation for the true menstrual cycle. Young girls can also get some light bleeding after they experience their first menstruation as the body adjusts to the changes while the menstrual cycle tries to establish a regular pattern.

It is also possible to have some light bleeding or after sex, especially if it is rough and there is lack of lubrication and using no protection. Friction can cause the vagina and cervix to have abrasional wounds or small lacerations, much like when you have skinned or scraped your knee. This has nothing to do with the menstrual cycle. However, the cervix does become softer during ovulation, and pregnancy also causes the cervix to become softer. So ovulating and pregnant woman have greater chances of getting some bleeding after sex.

In the same manner, having vaginal infections, such as bacterial vaginosis, yeast infection, and STDs, will cause your cervix and vagina to be itchy and red, making it easier to be scraped during sex. If it is accompanied by infected yellow or green discharges, it will appear in the form of spotting. In this case, your problem is not the bleeding but to be treated to kill the infection.

Having growths in the uterus such as polyps, or fibroids (which can lead to cancer) are usually cited as causes for heavier flows. However, they can also cause light bleeding or a brown discharge instead of a period. They can block the flow of blood or be destroyed during sex, causing some blood to be expelled.

Some women also have congenital defects or deformities since birth in their reproductive organs. Deformities in the uterus, cervix, vagina, hymen etc. can restrict menstruation causing only a light flow. Unfortunately, this sort of defects is more likely than not to be treatable only by surgery.

If you have conceived, the fertilized embryo will attach itself to your uterus in a process called implantation. While this is happening, you will also experience some light bleeding and cramps. Many women mistake this as PMS and when they find out that they are actually pregnant it is a complete shock. Implantation cramping is actually milder than PMS, and will occur only on one side of the uterus, the side where the fetus is implanting.

Some women will continue to experience menstruation during early pregnancy until it eventually goes away. This is due to not enough hCG (human chorionic gonadotrophin) or the so-called pregnancy hormone to interfere with estrogen levels and thus stop the menstrual cycle at the beginning of pregnancy.

However, early pregnancy implantation bleeding and menstruation during early pregnancy can mask a more serious condition, such as miscarriage or an ectopic pregnancy. Miscarriage is when the baby does not survive while being in the womb and must be expelled. Ectopic pregnancy is when the baby is formed outside the safety of the uterus. It is important to monitor the amount of flow especially if it becomes heavier, and if it contains tissue, and if the cramping grows worse. A lot of women do not know they have miscarried, or even pregnant, until it is too late.

Light bleeding may also occur during the second or third trimester of pregnancy. In this case, it is a sign of a dangerous condition involving the placenta. The placenta is responsible for giving oxygen and nourishment to the baby in your womb, as well as removing its wastes. It is normally located attached to the upper part of the uterus. It is possible for it to become partially detached or completely detached and settle to the bottom of the uterus and obstruct the cervical passageway. As you can imagine this can cause complications to the baby during the rest of the term and especially upon delivery.

Even after pregnancy, you will not return immediately to your normal cycle after birth. More so if you are breastfeeding. When I mean breastfeeding, it is actually nursing your child and not using breast pumps. The production of milk is tied in with the production of the hormone prolactin. Prolactin is one of the hormones which restrict estrogen production. No estrogen, no ovulation. No ovulation, no period. However, if breastfeeding is not regular (if there are breaks in breastfeeding) and if it is not constant (such as nursing only during the day and not at night) then menstruation may arrive in stops and starts.

Being overweight can cause lighter periods. Apart from the obvious effect of fat to the obstruction of the menstrual pathways, fat cells produce estrogen. As previously mentioned, high estrogen levels mean less or no menstruation.

On the opposite side of the spectrum, crash dieting or malnutrition will cause you to experience little or no menstruation. In an effort to survive, instead of expanding the much-needed blood into menstruation, the body will keep it instead. This also happens when you exercise excessively.

There are disorders that affect glands, the adrenal, thyroid, pituitary and others, that can affect estrogen levels as these glands regulate hormones. That is why being stressed can also cause lighter flow, or late periods, or missed periods because it affects the hypothalamus, which controls the pituitary gland, which controls other glands, including the ones that produce estrogen.

Pre-menopause is characterized by decreasing estrogen production leading to dwindling menstrual flow until the onset of menopause.

Even women who have had hysterectomy may still experience menstruation, especially if the doctor chose to retain a portion of the uterus. These flows will be irregular and lessen and lessen until there is no uterus left to shed.

The cause could also be hereditary. You could find out that any of your female relatives, your mom, your sister, your aunt, cousin or grandmother, could have experienced the same thing without any apparent cause. In that case, you can relax because there is nothing you can do and nothing you need to worry about.

Even though some of these underlying causes can be worrying, it is not to say in certainty that you have them. Suspecting you may be miscarriage would only stress you even further and may even cause a miscarriage for real.

It is also important to be armed with information before making a visit to the doctor. They are not infallible and you may remind them of something they could overlook.

It would also be good to take your sanitary pads or panty liners with you when you seek consultation, or take pictures of these, so that it would be easier to make a diagnosis. It is also a good way for you to monitor any sudden or alarming changes to the amount and color of your flow.

On the other hand, you should not immediately dismiss your symptoms as something that can be ignored, such as the side effect of your medication. It could be possible that the dismissable causes are masking a condition that must be treated.

It’s possible that even though you know that you’re experiencing light bleeding because it is hereditary, you may still have an infection, or you are pregnant after all.

If the matter is the question of pregnancy, check for other symptoms, such as nausea, changes in your breasts, frequent urination. Although the surest way is to have a pregnancy test.

Of course, as they say, the best remedy is prevention. You wouldn’t have to worry about light bleeding out of your period if you already have the right weight for your height, if you don’t smoke or drink, if you avoid stress, if you provide your body the proper nourishment, if you exercise regularly (even if it’s just taking a long walk), if you take enough rest and sleep, if you don’t constantly change work shifts, if you practice good feminine hygiene and safe sex.

It’s also a good idea to wear non-restrictive clothing and clothes made of breathable non-synthetic fiber, such as cotton. Even though it is common practice, gynecologists actually discourage the use of douches, as these affect the balance of organisms in your reproductive system which already has a check and balance system in place. Scented soaps and washes are also discouraged as these can irritate the vagina.